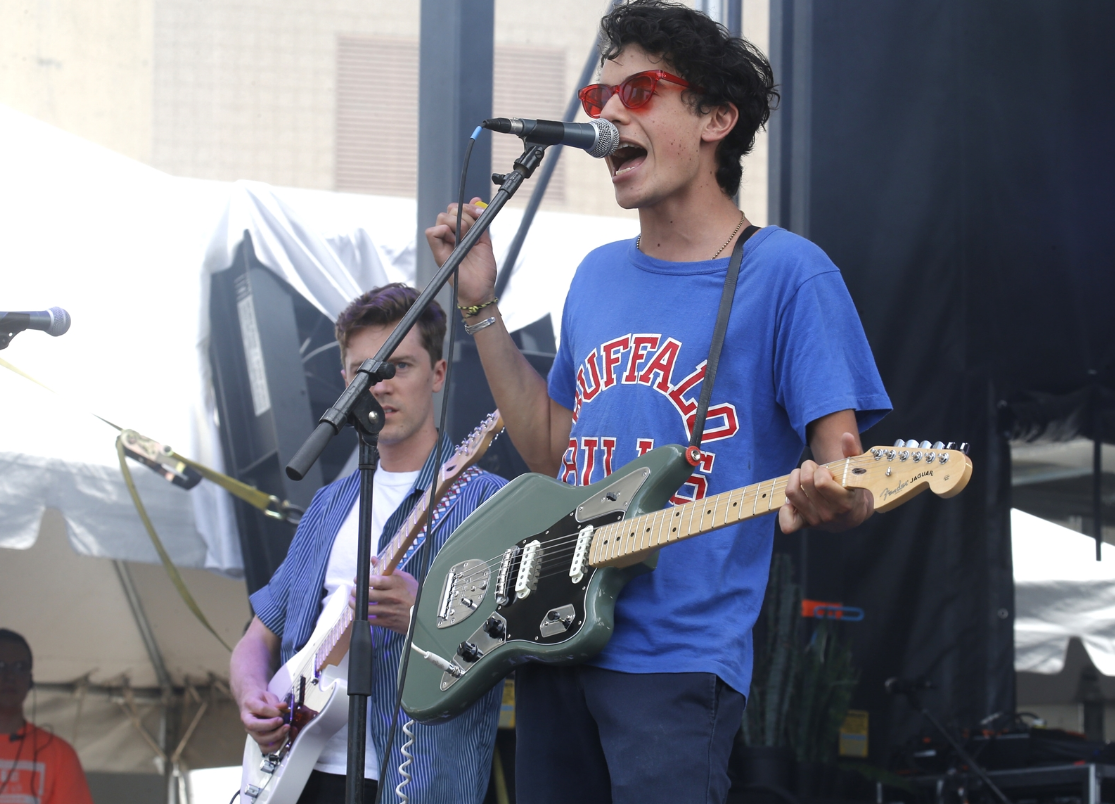 Jordan Topf, lead singer of the band Mainland, performs at

Five summer editions of 107.7 Alternative Buffalo’s Kerfuffle are now in the books. And after its latest affair on June 16, the station can check off another rollicking amalgamation of Fender rock, electro pop and all points between along Buffalo’s Canalside waterfront. The daylong festival – featuring Mainland, Mansionair, Family of the Year, Marian Hill, Robert DeLong, Manchester Orchestra, Taking Back Sunday, Matt & Kim, and AWOLNATION – was part guitar barrage, part glitter bash, and all sun-kissed ballyhoo, just as annual attendees have come to expect.

When the Kerfuffle lineup was announced, some were confused as to why Atlanta’s Manchester Orchestra wasn’t a headliner. Its muscular, albeit emotive performance at Canalside did nothing to weaken this wonder. Led by Andy Hall – and flanked by guitarist Robert Hall and bassist Andy Prince – the quintet’s exhibition was a chord-driven storm, with explosive favorites like “I’ve Got Friends” and “Cope” responsible for highlighting a set hard to top.

End with a NATION

As for the actual festival headliner, Aaron Bruno’s AWOLNATION didn’t disappoint. Those who endured the day’s wait until its evening-ending set were treated to older tracks (“Kill Your Heroes”), sublime new material (the sublime “Handyman”) or a variety of wailers that rode the lightning and metal-level chops of lead guitarist Zach Irons.

Balloons. Confetti. On-stage histrionics. Mash it all together and you have live music’s answer to the T-shirt cannon, Matt & Kim. Over its hourlong set of giddy dance pop, the Brooklyn duo unleashed its expected glee on tracks like “Get It” and “Hey Now,” all while spreading its positive vibes to Prime Street.

Disaster is when a tech-dependent artist’s technology malfunctions at the start of a show. Terrifying, but when this happened to vocalist and multi-instrumentalist Robert DeLong – causing a 15-minute delay – he recovered. Once he regrouped, he jumped behind his drum kit for an incendiary version of “Global Concepts,” then proceeded to tear through a thumping (albeit shortened) set of inventive work.

For fans wondering whether the day’s lineup was determined by amplified potency, those suspicions were likely obliterated after the day’s opener, Mainland. Fronted by the jovial bounce of Jordan Topf – clad in a throwback Buffalo Bills T-shirt – the quartet rocked early arrivals with the pristine power pop of “Permission Slip” before showing its stylistic dexterity on dramatic radio favorite, “I Found God.” 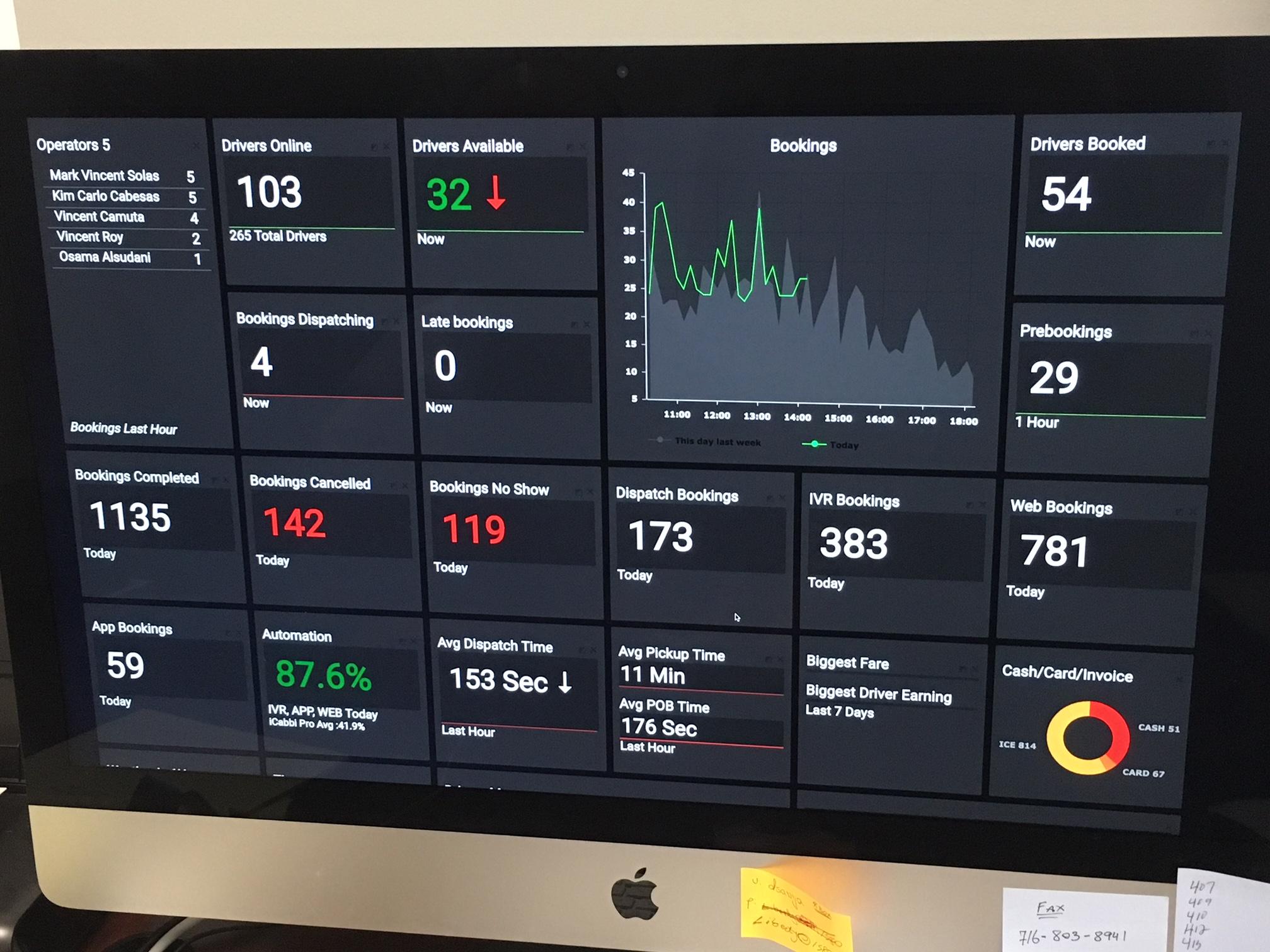 Most calls to Liberty Yellow Cab are now handled by an automated system.

LIBERTY YELLOW ROLLS OUT NEW TECHNOLOGY TO COMPETE WITH RIDE-HAILING

A local cab company is not yielding to the new kids on the block, Uber and Lyft, without a fight. Liberty Yellow Cab is turning to technology to stay competitive with the ride-hailing companies. To use ride-hailing, people have to set up an account with a provider and download a company app on a computer or a smartphone.

“Not everybody has a smartphone. Maybe a lot of the seniors and older adults may not use that technology,” said Bill Yuhnke. The president of Liberty Yellow Cab says calls to his company are now handled by RedRoute, a state-of-the-art, Interactive Voice Response system, developed with the backing of Cornell University. “The thing is, as this business is changing, the technology’s changing, you’ve got to change with it and give what the public wants,” Yuhnke said. The biggest advantage, he says, is people don’t need to give an address. The technology pinpoints the caller’s location, even if on a street corner, and confirms the pick-up.

Liberty Yellow’s IT Manager, Djordje Savija says the system sends text message updates and smartphone users can also track their cab. “As an example, there’s vehicle 288 accepted my call. I can click on this link. See who’s coming to pick me up and what vehicle is coming to pick me up,” Savija said. Yuhnke says Liberty Yellow is the first cab company in the nation to use voice recognition technology and he believes he is now ahead of the competition because his company also has several apps. “You still have the option to talk to a live person. You dial zero and you can get a live person. So, we got it all covered. We got all the bases covered,” Yuhnke said. Yuhnke admits “ride-sharing put cabs in check,” but he says now, about 90 percent of his business is automated in some way and he’s “looking ahead to the future.”

Call Center Managers – Imagine if half of your phone calls no longer required a human being. Our automated system is capable of receiving inbound calls and also placing outbound calls to fit the needs of your business and reduce your reliance on human agents.

1. Better Process: Our technology receives and places your calls, successfully automating them so a live agent is not needed.

2. Better Experience: The system is powerful, accurate, and fast. Your customers will get what they need without dealing with hold time and human agents.

– Late Callouts, for when your fleet is busy and your driver is late.

– Reservation Callouts, to remind customers of their upcoming trip.

– No Show Callouts, so you can be sure your customer doesn’t want the ride.

GET $10 OFF YOUR FIRST RIDE

President Bill Yuhnke and the entire staff at Liberty Yellow Cab would like to take a moment to thank you all including businesses and companies who have made us their first choice when it comes to their business transportation needs. Whether it’s a ride to the airport, bus, train station or lunch and dinner occasion with a client across town, Liberty Yellow Cab will get you there on-time, worry-free and relaxed. Thank you all for your continued support and business.

Many times getting a taxi to take you around different places you want to visit may be difficult. Sometimes, you might need to book, call and wait. However, as technology advances in the world, things are becoming easier and long processes are becoming shortened. With mobile phones, you can achieve quite a lot of things. Applications and software programmed by people have solved quite a lot of problems. Liberty yellow been a technologically driven transportation company, have added a quite impressive add on to our service. Liberty yellow is happy to announce to you that an app that can help you enjoy various services from us has been developed. RIIDE app, as its name suggests is an app that will make you have a worthwhile and interesting ride. It makes all of our services accessible to you with ease.

GET THE APP AND ENJOY IN RIDE

To get this app is not a problem, just download it from the play store, and you are good to go. Also, our social media platforms are available, INSTAGRAM, FACEBOOK, TWITTER. Get the app today and enjoy seamless and delightful rides around your proposed routes.  All around Buffalo and Niagara Falls, or in the other cities of WNY.

USE THE PROMO CODE

Be sure to check out “RIIDE”, a free mobile transportation app that allows you to control all aspects of your travel. Enter promo code “RIDE LOCAL 1” for $10 off your first ride! You can always contact us for more information at www.libertycab.com or by calling 716-877-7111.